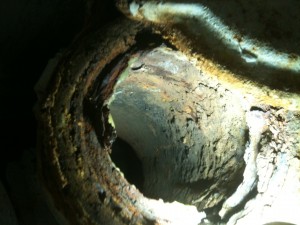 This image is of a cleanout used for camera access to a drainage system. This leads to a main trunk, then to the manhole collection point. Push-type pipe camera systems with DVR recorders are excellent for navigating through small drain lines with multiple bends. 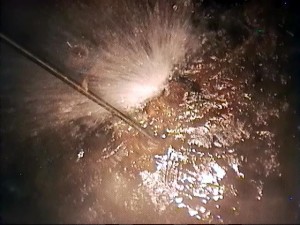 This image shows a burst sump inlet pipe at the union joint in a vault. This image was captured using an explosion-proof pan, tilt, and zoom camera. An explosion proof camera should be used for sewer inspections since oily water, chemical, and sanitary sewer systems have potentially explosive atmospheres. 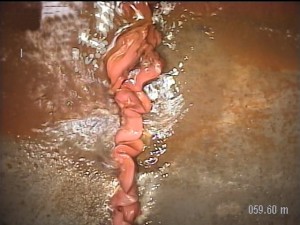 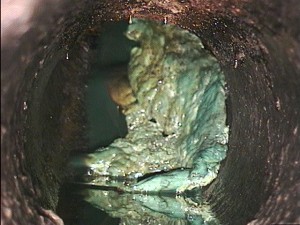 This image was taken of an elbow in an oily water sewer line using a robotic camera head. The explosion proof camera was lowered into the manhole and then focused in on the restriction using pan, zoom, and tilt capabilities. An explosion proof camera should be used for sewer inspections since oily water, chemical, and sanitary sewer systems have potentially explosive atmospheres. 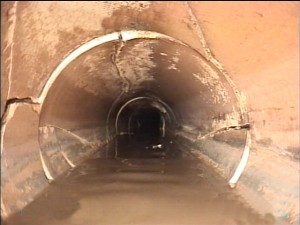 This image shows a multi-purpose line used in the oil and gas industry. The clay pipe has multiple cracks and fracturing. A CSA Rated Explosion-proof video crawler was used to inspect and record the underground service. 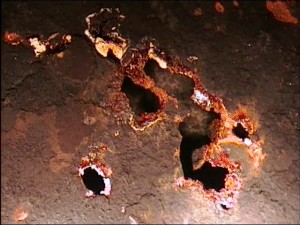 A explosion-proof robotic pan and tilt camera was lowered into a sump vault to view a potential leak of the sump drainage piping. The image shows perforations of the sump piping from internal corrosion. The video documentation of this inspection was provided to the client and repairs followed immediately. 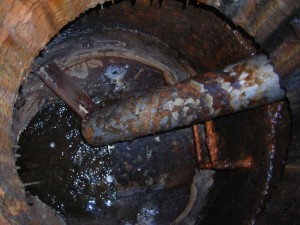 This image shows the manhole bottom bench area with foreign material and a tap-in connection. 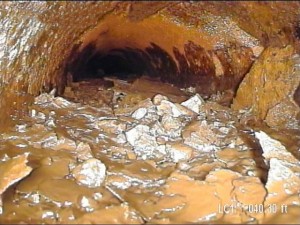 The image shows a large connection fouled with heavy sludge and general corrosion. This line had been in service for many years. Often, video inspection reveals a need for further cleaning in order to drive down and inspect the entire system. 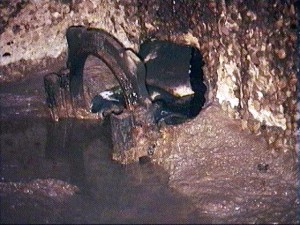 This image shows a gate valve in a sump that is corroded and eaten away. This image was captured using an explosion proof pan, tilt, and zoom camera. An explosion proof system should be used for sewer inspections since oily water, chemical, and sanitary sewer systems have potentially explosive atmospheres. 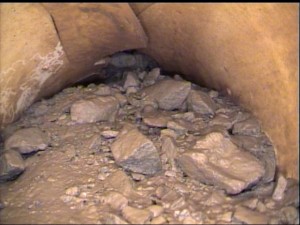 The PVC pipe in this photo has had a serious failure. The pipe collapsed and a large amount of rocky material from the back-fill has caused a blockage. 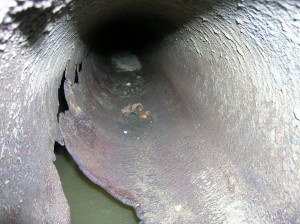 This image shows excessive corrosion of a drainage pipe accessed from a excavation. A explosion-proof video crawler was used to capture this image. 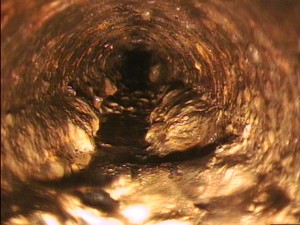 This image shows heavy encrustation build-up at a clean-out access. Often video inspection is used in conjunction with cleaning procedures to ensure effectiveness or troubleshoot. 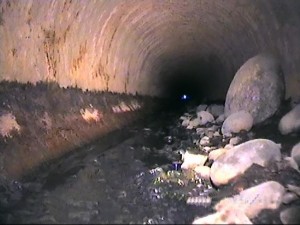 This image shows large rocks and deposit in an oily water sewer line. This image was captured using an explosion proof robotic crawler with a pan and tilt camera. An explosion proof system should be used for sewer inspections since oily water, chemical, and sanitary sewer systems have potentially explosive atmospheres. 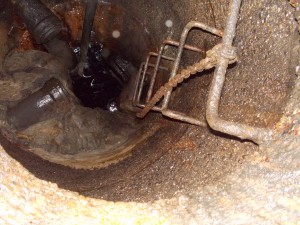 Large deposits were noted at the bottom of this manhole, impeding deployment of a robotic crawler into the main connections. The image was sent to the client and arrangements were made for the manhole to be cleaned and inspected using video inspection technology. 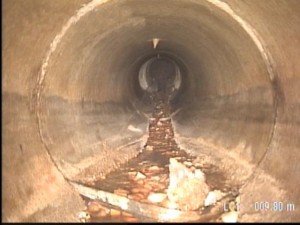 This image shows the 6 o'clock position of the underground line with excessive erosion from high volumes of discharge from years gone by. The client was able to use the information from the video inspection to pinpoint connection damages and make the necessary repairs. 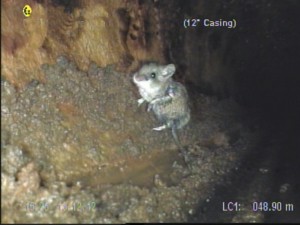 During an inspection of a drainage line, this curious resident paused for a photo opportunity. Say "Cheese!" 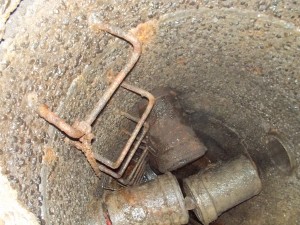 An image was taken looking down a manhole to verify whether a robotic explosion-proof crawler could be used. The drain connection discharge leg seals have dis-bonded and have created a large washed out area in the main barrel of the manhole. Exposed aggregate from high concentrations of hydrogen sulphide can be seen in the image. 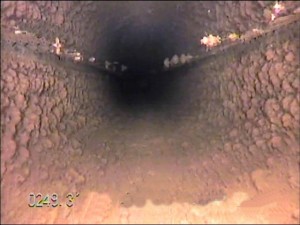 Maverick has crawlers that operate underwater to supply high resolution imagery. This particular image was taken while our crawler was travelling through tailing lines from a tailing pond. Buildup is seen on the walls and lighter material floating on top of the water above.
x

This line had been backing up, and collapse or fouling was suspected. As this video shows, the cause of the blockage was two wooden boards stapled together.

This video shows an old storm water sewer (SWS) system from the 1960s with internally damaged reinforced concrete pipe (RCP). Erosion appears to be the culprit from years of high pressure water discharge and flow. This channelled effect has split the pipe between the 5 to 7 o'clock position. Engineers and consultants used this video inspection information to determine the next steps for repair or replacement.

In this video of a 50 year old fire water line, significant mineral deposits are apparent. The European-designed crawler used for this inspection has auto-levelling features to prevent the crawler from flipping over.

A large video inspection crawler was used in a abandoned 60" diameter underground culvert to verify whether any deformations existed. The video inspection clearly showed significant deformation with one area of collapse. Using this information, engineers determined the best approach for repairs.

This clean-out was inspected using a remote video camera with pan and tilt capabilities to determine the overall condition of the line. Oxidization and generalized corrosion of the carbon steel line is apparent in this video.

This video shows build up hanging at the joints of a chemical sewer piping. A tripod-mounted pan, tilt & zoom (PTZ) drop camera was used for a quick look before deploying crawler or push-type systems.

This video was taken using a drop camera in a catch basin. The PVC pipe is deformed where it connects into a trunk prior to the basin.

A explosion-proof crawler was used in this video to gather information regarding the general condition of the oily water sewer (OWS).

An explosion proof pan/tilt/zoom (PTZ) camera was used to inspect the manhole basin. The tap-in connection does not appear to have a seal, and groundwater is evident entering the basin around the connection. Maverick has noted this type of defect in connection with subsurface erosion and voiding around catch basins and manholes. Ground-penetrating radar (GPR) is often deployed in connection with remote video systems for these applications.

This short video shows a level of build-up deposited during years of operation. There is also a slight offset at the connection and some deformation of the connection piping.
Maverick's Safety Program Online With Compliance Companies, Including: