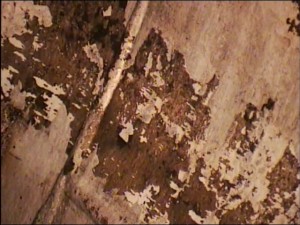 A intrinsically safe pan, tilt & zoom (PTZ) camera system was deployed down through the man way access hatch. The camera was used to inspect and record the general conditions of the tank shell internal coating. This image shows a section of shell near the long seam with coating loss and potential active corrosion. 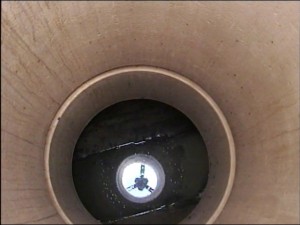 Maverick often uses a tripod to safely deploy camera systems. In this image, the tripod is set up over the man way access, and it is reflected back from the water at the bottom of the flare knock out. The video system eliminated the need for human entry into this hazardous confined space. 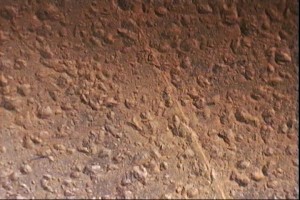 This is an example of internal pitting on the shell of a blowdown tank near the inlet nozzle. 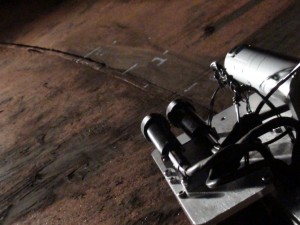 Magnetic video crawlers can eliminate the need to build scaffolds inside large tanks and spheres. Magnetic crawlers can complete a full 360 degree circuit inside a large vessel such as a sphere and image weld profiles, corrosion & erosion. 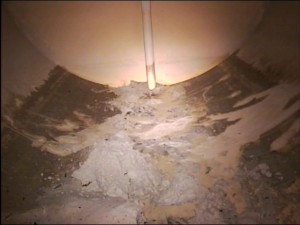 Flare Knock Out After Cleaning

The image shows deposits remaining after high pressure cleaning inside an underground tank. Video inspections are excellent for observing general conditions inside vessels and tanks prior to human entry or replacing confined space entry altogether. 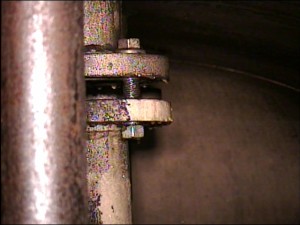 A large explosion-proof pan/tilt/zoom camera on a tripod was used to capture the inside of a flare knock out. There were concerns about potential damages after an explosion due to iron sulphides. This image shows that the main gasket fitting has blown out and the main bolts are backed off. 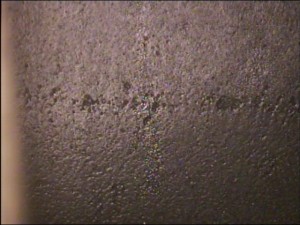 A video inspection was performed on a non-coated underground tank with a high potential for corrosion from being in sour service for over 30 years. The head of the tank displayed significant indications. 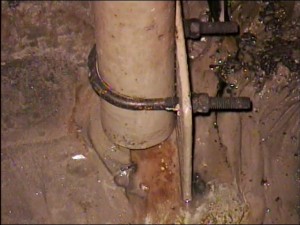 The image shows the bottom leg of down-comer piping after high pressure cleaning. The support and weld area is clearly visible, and no significant obstruction or fouling is evident. 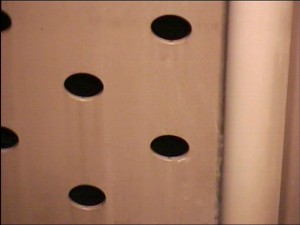 Video inspection was used to confirm the effectiveness of high pressure cleaning in an underground tank. This example shows the baffle perforation openings are clear of fouling. 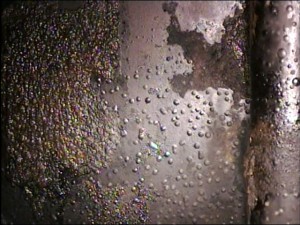 Hydrogen blistering was detected inside a acid gas knock-out. Indications were noted on the shell and internals of the underground tank. A explosion-proof PTZ camera was used to explore the inside of the tank without human entry, avoiding the confined space hazards. 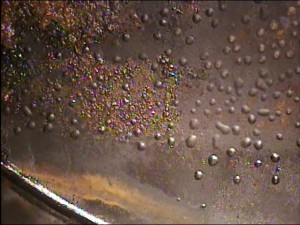 A rare photo was captured using a explosion-proof camera inside of a acid gas knock-out. Hydrogen blistering is visible on the head section of this underground tank. 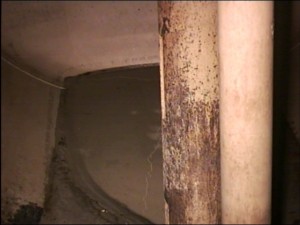 Video inspection cameras excel in gathering video documentation of underground tanks. This image shows the back side at the head of the tank. Standing liquid is obscuring the tank bottom. Based on the video evidence, cleaning was carried out to remove fouling before the final inspection.
x

Water cisterns are well-suited for remote locations where ground water is scarce. Cisterns are often used to provide water for drinking, sanitation, and other needs. This video shows ground water contamination entering at the transition from the well section barrel to the holding tank. There are clear indications of a circumferential crack and fracture of the concrete where water is infiltrating the tank.

A PTZ camera was deployed down inside a 40 year old sump tank. The inspection was required to determine the integrity of the concrete walls. The video shows one area of the wall with multiple cracks.

This underground flare knock-out was believed to have had a small explosion. This may have blown out the gasket on one of the down-comer flanges. The bolts also appear to be backed off. The other scene shows the opposite down-comer welded section at the top of the shell.

A large, intrinsically safe camera was lowered down from the man-way access to determine the general condition and cleanliness of this underground tank. The level downcomer appears to be missing, although the float is still intact. The bottom floor of the tank was fouled and required cleaning prior to final inspection.

The video shows multiple liner defects at the transition spool area just before the delta valve. Coke deposits are clearly seen behind the liner, contributing to the deformation and warping of the liner. The liner fastener clip is also visibly broken in the deformed area.
Maverick's Safety Program Online With Compliance Companies, Including: